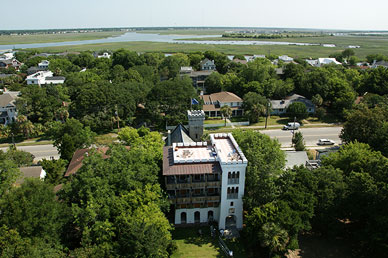 Sullivan’s Island is a bedroom community of Charleston, which is five miles by water or nine miles by road from Mugdock Castle. The island has served as a tranquil sanctuary for Charlestonians and visitors “from off” for more than three hundred years. An honest to goodness beach town with full time population of 2,000, Sullivan’s Island is served by a Mayor and Town Council. It has its own elementary school, library, playgrounds, tennis courts, post office, fire station, and four churches. In addition to art galleries and small shops, eight restaurants are located on Sullivan’s Island. A boat ramp and three miles of sandy beach are but a short walk from the castle. Sullivan’s Island is a family-oriented place and does not have hotels, neon lights, and loads of tourists. If you’re seeking that, best to look elsewhere.
Activities
The eastern end of Sullivan’s Island offers one of the best places for wind surfing and kite boarding on the east coast. Surfing is best at nearby Isle of Palms and Folly Beach. Arrangements are easily made for in-shore and off-shore fishing charters. Power boats and paddle boards are also available at nearby outfitters. The closest golf course is seven miles from Mugdock Castle. Hunting charters for quail, dove, turkey, and deer, can also be arranged. The area offers an endless number of potential day trips. Cultural, environmental, and historical resources abound. 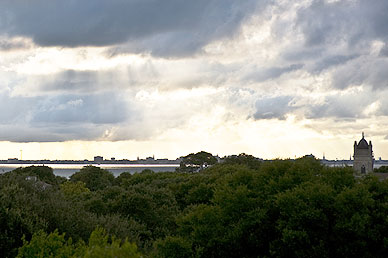